Since my schedule had run amok, I went to “lunch” before 9 a.m. at my favorite Vietnamese vegetarian restaurant. My “usual” wasn’t being served yet, so I pointed at a steaming bowl my neighbor seemed to be ecstatically devouring. I quickly realized it was “pho,” the national soup of Vietnam. It’s so popular that it had made the Oxford Dictionary (described as: A type of Vietnamese soup, typically made from beef stock and spices to which noodles and thinly sliced beef or chicken are added.) I will occasionally eat meat, so I’d tried it a few times in cafes and on the street.

The key to a healthy, as well as tasty pho, really depends on what you put in it—my street pho likely contains more salt and fat than optimal. It has a soup stock made by cooking beef, pork or chicken bones. But good restaurants remove the excess fat at the top when cooking these bones, making their meals both healthy and delicious. A good analysis of the nutritional value of traditional pho can be found here. The vitamin A, D, calcium and iron are a real plus, and that can improve by your choice of herbs and vegetables.

I found a lovely recipe for pho from Vegetarian Times. When I’m back in Florida, I’ll likely often use the Vegetarian Times recipe. But for now, I’m blessed to be in Vietnam, with an amazing little vegetarian restaurant serving the best pho I can imagine.

Scott is an author, blogger and coach--in all things he's an encourager. A Stephen Minister with a M.A. in Pastoral Counseling, Scott seeks to help others find more joy in life through brain, body, financial, community, and spiritual development. Our goal is to help reduce stress, depression, anxiety, and loss of focus. I want to empower and energize people seeking freedom from boredom, low motivation, low self-esteem, unnecessary anxiety or the shroud of sadness. Together, let’s maximize the joyful opportunities in life, and reach our potential.

Joy in Helping Others

We're passionate about helping orphans and disadvantaged children through Vision School in an Addis Ababa slum. It fills our heart with joy. Want to join us? 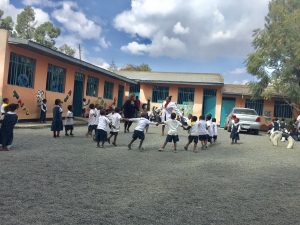 Highest recommendation from Scott: This book is a life changer. The title is dramatic and catches your eye, but the material is spot on: highly readable, yet full of good science and research. Obviously we all die. But when do you die, and why? Dr. Greger show us how we can protect ourselves from premature death. Nutrition and lifestyle changes can reduce the risk for cancer,diabetes, Parkinson's, high blood pressure, and more. This book is a great investment. Medical care costs are exorbitant these days, as is insurance. Please buy the book!

The 15 Invaluable Laws of Growth: Live Them and Reach Your Potential

Scott highly recommends this writer. This book is one of many of Maxwell's books that should be on your "shelf." His obvious kindness and desire to help people become the best they can be is very apparent. His knowledge and specific concepts are spot-on for managing and improving your life.

How can you find more joy, and gain more peace? A workout should push and stretch you. It is terrific if the workout is also fun to do. And of course there must be attainable objectives.  Certainly these goals apply to The Jesus Workout, which is intended to help you stretch and grow spiritually, to better know God, and to get muscular in obeying and serving God.

Any cookies that may not be particularly necessary for the website to function and is used specifically to collect user personal data via analytics, ads, other embedded contents are termed as non-necessary cookies. It is mandatory to procure user consent prior to running these cookies on your website.